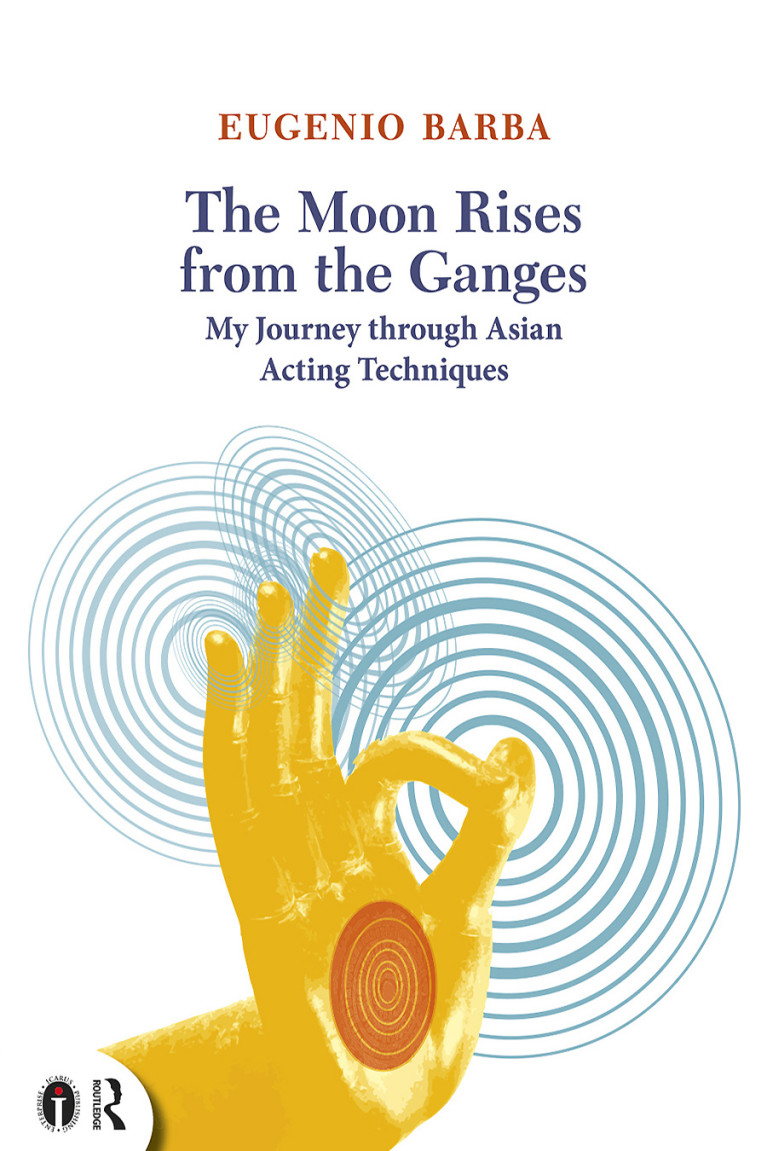 The Moon Rises from the Ganges: My Journey through Asian Acting Techniques

Please note that we ship only to addresses within Poland. If you want to order a book and have it shipped to an international address, email us at ksiegarnia@grotowski-institute.pl.

Edited, introduced, and with an appendix by Lluís Masgrau
Photo selection and captions by Rina Skeel
Translated from Italian by Judy Barba

The Moon Rises from the Ganges: My Journey through Asian Acting Techniques presents Eugenio Barba’s most important texts on his research into the technical knowledge of Asian performers. Weaving together encounters, detailed descriptions, theoretical reflections, anecdotes and travels, the author unfolds the changing phases in a passionate inquiry which has been a constant reference in his more than fifty-year career.

The book deals with the various aspects of Barba’s collaboration with traditional actors and dancers from the East. It describes their frequent meetings and their work exchanges, which contributed to the comparative analysis of their know-how. The result of this extensive cooperation has opened up the new field of Theatre Anthropology, defined by Barba as the study of the technical pre-expressive principles at the root of stage presence in any actor/dancer. The pragmatic activity of the International School of Theatre Anthropology (ISTA), founded in 1979, is illustrated through the procedures and variations arising from questions and demonstrations. What is rhythm, improvisation, flow, presence?

In this ‘performers’ village’ that is ISTA, Asian, Western and Afro-Brazilian actors/dancers scrutinise each other’s work, relating and mapping out the similar technical principles underlying their different ways of thinking and working. The autodidactic practice of Odin Teatret actors together with the training methods of the European theatre reformers of the twentieth century are continuously confronted with the results of this research from the perspective of a performer’s ‘scenic anatomy’.

Edited by Lluís Masgrau, The Moon Rises from the Ganges: My Journey through Asian Acting Techniques includes some of Barba’s well-known articles which have already become classics, as well as relatively unknown and unpublished texts. The result is a valuable guide for practitioners, an account of pure research into the know-how of the performer, and an important chapter of East-West dialogue in twentieth-century theatre.

Eugenio Barba (1936) studied theatre in Poland between 1961 and 1964, spending three years at the Laboratory Theatre of the 13 Rows directed by Ludwik Flaszen and Jerzy Grotowski. His first contact with an Asian theatre was with kathakali in India in 1963.

Barba founded Odin Teatret in 1964 in Oslo, Norway, and moved it in 1966 to the provincial town of Holstebro, Denmark. In 1979 he established the International School of Theatre Anthropology (ISTA), opening a new field of studies devoted to a comparative approach to acting techniques from various genres and cultures. He has directed 76 productions with Odin Teatret and with the intercultural Theatrum Mundi Ensemble.

Among his books, translated into many languages, are: The Paper Canoe: A Guide to Theatre Anthropology (1995), Theatre: Solitude, Craft, Revolt (1999), Land of Ashes and Diamonds: My Apprenticeship in Poland, followed by 26 Letters from Jerzy Grotowski to Eugenio Barba (1999), On Dramaturgy and Directing: Burning the House (2010), and, in collaboration with Nicola Savarese, A Dictionary of Theatre Anthropology (2005). For his research Eugenio Barba has been awarded honorary doctorates from the Universities of Aarhus, Ayacucho, Bologna, Havana, Warsaw, Plymouth, Hong Kong, Buenos Aires, Tallinn, Cluj-Napoca, Edinburgh, and Shanghai, as well as the Reconnaissance de Mérite Scientifique from the University of Montreal, and the Sonning Prize from the University of Copenhagen.

I went to Asia for the first time in 1956 at the age of nineteen, working as a sailor on a boat. My first stop was in India. At that time, theatre was far from my mind. Seven years later, I was again travelling towards India, in a second-hand car which I didn’t know how to drive. This time I wanted to learn something professionally useful. I was searching for ‘Indian theatre’. In New Delhi, I would finally become acquainted with it.

I was advised to meet Ebrahim Alkazi at the National School of Drama. But there, to my surprise, I found myself hearing and watching the same things they taught at the Warsaw theatre school.

Somebody said to me, ‘Why don’t you go to Bombay? There you will find Adi Marzban, a writer who does some interesting theatre.’ More days of driving. But in Bombay too I only found plays taken from the English tradition and popular farces.

Then someone suggested, ‘Why not go down south? There you really will find something quite unique!’ He assured me that kathakali would not disappoint me. He was from Kerala. […] What I saw in Kerala is engraved for ever in my memory. The children were admitted to the school at the age of nine or ten. They started at dawn. Still numb from sleep, they began on their own to repeat again and again the laborious kathakali postures and steps. They were friendly and curious. They became my companions.

Even more than the beauty of the performances, it was my own incapacity to understand that surprised me. Why was I, a European spectator, so bewitched by these actors when I could neither understand the story they were telling, nor the meaning of their message, nor their language or the conventions?

What was it that made me follow every gesture, every step, dance or deafmute dialogue of these actors? Was it their technique that kept me spellbound during an entire night, seated on the ground amongst a crowd who slept or continually got up to stretch their legs, or to eat or drink?

These questions constituted the true influence on me of kathakali. For years and years they have remained alive, and have then reappeared in other contexts, leading me towards an attempt at an answer that I have called Theatre Anthropology.

Considering that 50% of all books in translation worldwide are translated from English, whilst only 6% are translated into English, Odin Teatret (Denmark), the Grotowski Institute (Poland) and Theatre Arts Researching the Foundations (Malta) have created Icarus Publishing Enterprise, whose purpose is to present texts by artists and scholars in English translation about the practice and vision of theatre as a laboratory.

Icarus was the name of a schooner that sailed from Civitavecchia in 1697 with a cargo destined for a Venetian merchant resident in the international trading port of Smyrna. Its mythological name was intended, paradoxically, as a bringer of good luck, to ward off shipwrecks. In its hold, the small vessel also carried a luxurious curtain never used before, a few painted scenes and a number of scripts and musical scores from a theatre erected in Rome by Queen Cristina of Sweden and torn down on the order of Pope Clement X.

Similarly to that schooner, Icarus Publishing Enterprise wants to ferry into international waters writings of theatre artists and scholars who, despite their value, risk a limited circulation because of the language in which they have been written. We know by experience that theatre studies are effective only if they succeed in piercing the wrappings of academic commonplaces and inspire those wishing to do theatre. Many think that the theatre has no future. This may be so. But one thing is certain: in the future there will surely be something that we are unable to imagine now, but that will be called theatre.